This theme was in conjunction with the St. Patrick’s Day celebrations. So I was quite tempted to take a picture of the celebrations here in the city (Yes, St. Paddy’s day does get celebrated here on the tiny red dot as well!). Unfortunately we couldn’t go to the parade at Boat Quay and my plan was washed out.

But then I thought of trying something at home instead. I’ve always wanted to take pictures of dripping coloured water at fast shutter speeds. So I raided the wife’s painting supplies and got all the tubes of green paint (water colours) and began prepping. 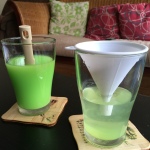 The setup I used was quite amateurish and impromptu. Essentially I used two glasses, a funnel and water. I mixed the paint with water in one glass and used a spoon to carefully drip the coloured water through a funnel into the second glass.

The second glass already had some water (non-colored) in it so whenever a drop of coloured water dripped into this glass through a funnel, there were spectacular patterns of green being formed.

Due to the high aperture and ISO, plus the natural sunlight, there was a ton of noise in the image. I’ve tried to minimise that with some clever contrast and highlights changes apart from some saturation, luminance and hue changes. However the final image is still fraught with noise.

Future attempts will obviously be a tad more planned and prepped. But I do believe I may have stumbled upon a decent setup for some really cool coloured water shots. I’ll definitely be experimenting with this setup to make it better and the images even more crisp and vibrant.